History of the Anson bomber in the Royal Iraqi Air Force.
أعلى

Royal Iraqi Air Force was received 30 aircrafts type Avro Anson Mk I in late 1944 these aircrafts used by I and VII squadrons for general purpose and were adopted as light bomber. Iraq was send first sq. to fight with athoer Arab Army air forces in 1948 against israel. 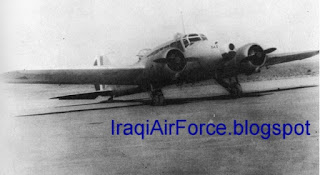 and Iraqi Air Force were used these aircrafts antil 60th. of the last century.
أعلى

One of young RIrAF pilots flying Ansons in the late 1940s was 1st Lt Arif ar-Razzaq, later C-in-C IrAF (starting in 1963), and then the Minister of Defence. He was with No.7 Squadron at the time.
أعلى