a chinese article on sales of military equipment to Iraq


According to local media reports, Iraq is said to have started on the purchase of several FD-2000 air defense missile (HQ-9 Export Edition) negotiations with China, before the missile was abandoned Turkey. Although this first selection is based on economic considerations, especially China to provide favorable conditions, but in fact Iraq has already started using Chinese weapons, the first is the rainbow 4 UAVs.
It is reported that by the end of 2015, Russian media reported that Iraq and China signed five agreements, including a bilateral military cooperation agreement in the field. Currently Iraqi army hopes in Russia and China who, particularly weapons and equipment. Iraq may soon purchase a number of Chinese weapons. Iraq has made a request to China, and China signed a contract for the supply of Iraqi weapons needed to buy about ten billion yuan. IrAAC equipment rainbow -4 unmanned attack aircraft are the latest results.
As early as during the Iraq Fourth International Exhibition of security and defense, the Iraqi Air Force Commander Gen. Anwar stand on a special trip to China. Among them, the Chinese 300 mm long-range rockets, 6X6 wheeled infantry fighting vehicles, MBT3000 main battle tanks, SH-1 Car assault guns and self-propelled artillery and other military equipment to Iraq attracted.
With the 2016 Zhuhai Air Show came to an end, the air show may be reached in some military procurement contracts have gradually spread, according to Iraqi media, the Iraqi government is preparing to China to purchase $ 2.5 billion worth of military equipment, including the red flag -9 anti-aircraft missiles and VT4 main battle tanks.
أعلى

from my understanding they're looking for HQ-9B version.
أعلى

Details of a possible arms deal between Iraq and China

For example, the overall size of the package of contracts between Iraq and China reached US $ 2.5 billion. Part of this money is a government loan. It is noted that although Iraq's Russia was a candidate number 1 and had planned to put the seven battalions of S-300, as well as proceed with the project assembly in Iraq (Basra) T-90S tanks. Russia's refusal to provide financial resources forced the Iraqis to turn to the Chinese side. Iraq's Council of Ministers must approve the selection in 2017 of advance payment of $ 833 million., Followed by a contract with the Chinese will come into force. Chinese export tank VT-4 (c) eastpendulum.com

In addition to air defense weapons package contract includes the supply of Iraq VT-4 tanks and other armaments for the army and the Iraqi police. Supplier will perform NORINCO Corporation and export company Poly Technologies. Representatives of the first of them took part in a meeting with the Iraqi government July 13, 2016, during which discussed the restoration of the Iraqi defense industry.

The first buyer VT-4 tanks became Thailand, which had had a favorable impression of the car, despite the relatively high price of $ 5 , $ 4 million. for the tank. This tank is also being tested in Pakistan.

Moreover, Iraq in 2015, uses four shock-UAV CH 4 produced in China. It is possible that Iraq additional UAVs of this type will be ordered, in an embodiment of the CH-5.
أعلى

According to Iraqi sources, the country is in the last negotiating stages to seal a $2.5 billion arms purchase deal with China. Sources added that Iraq turned to China for weapons after it could not reach a deal with Russia to buy weapons on credit.

The weapons being considered include air defense systems such as the HQ-9, which is the Chinese equivalent of the Russian S-300.

China’s third generation main battle tank, the Type 99, is also being considered to be included in the deal.

As you remember a miniature model of the Type 99/ZTZ-99 was seen at the desk of the ministry of defense earlier, VT-4 being an export model version of the Type 99 series.
أعلى

Thailand bought the Vt-4 tanks for about $5.4 million per tank. I assume we would buy ~ 150 tanks, which combined with our M1A1s and T-72s (hopefully those are going to be upgraded) should give us 2-3 armoured divisions. That would end up being ~ $800 million. That leaves $1.7 billion. Is that enough for 7 battalions of HQ-9? Would we have to buy less than 7? Would there be any money left for a few Ch-5 drones? I'm afraid we won't get any answers for years to come
أعلى

If I right understanding your thoughts for 150 tanks VT-4, Iraq can get only a halve armored division or 3-4 battalions. 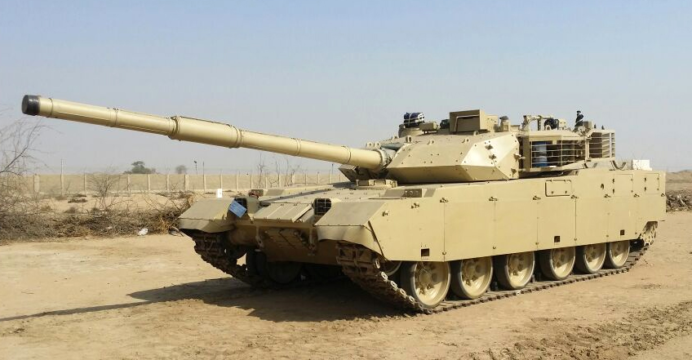 The VT-4 is based on the Soviet-era T-72 tank design and armed with a 125-mm smoothbore gun. Improved composite armour for hull nose and the front part of the turret. Reactive armour can be fitted to each side of the tank. 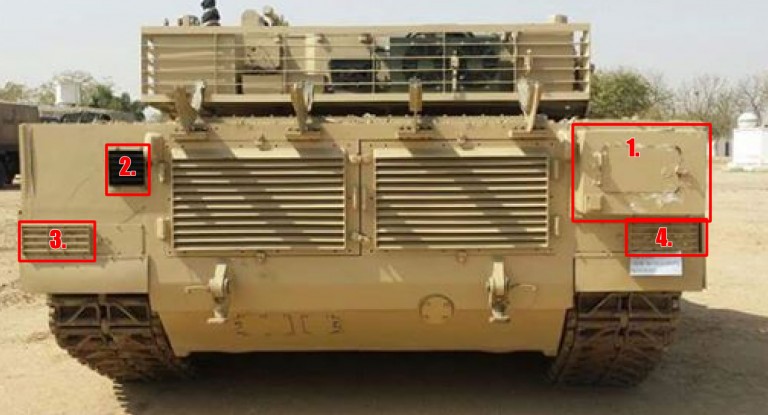 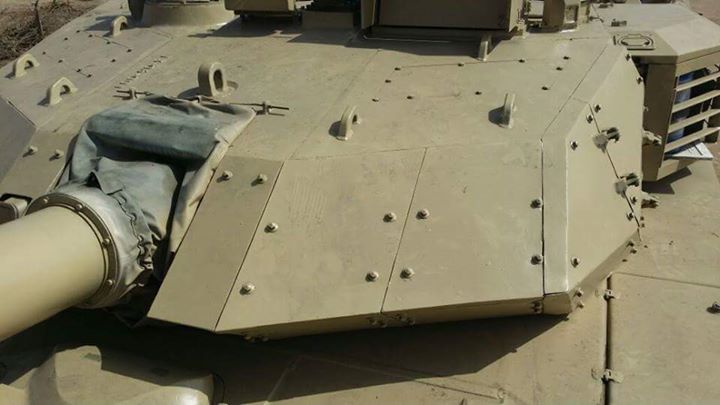 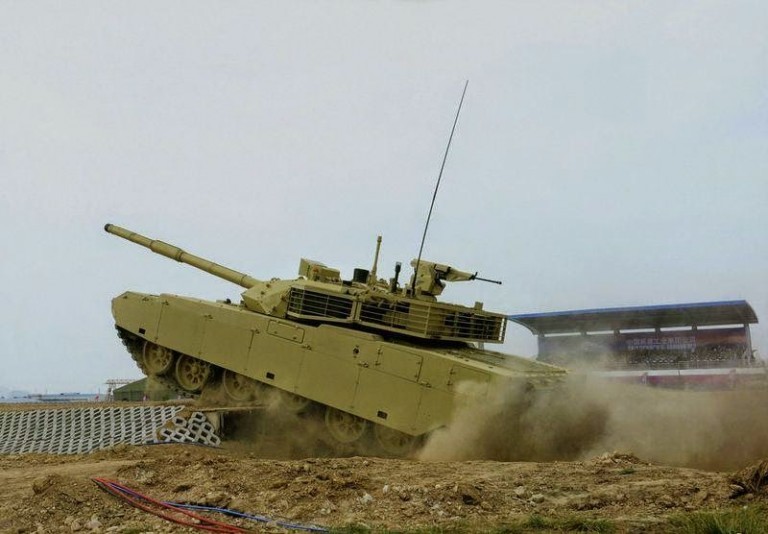 They wouldn't be very large or heavy divisions, but it would be a start towards building a proper armoured force
أعلى

I think the VT-4 is being seen as an alternative for the T-90 production, thus producing/assembling VT-4 tanks in Iraq, not buying them each from China as Iraq is looking for a tank type to wield in mass numbers. Local assembly/production should cut down the price.
أعلى

Also, we should definitely get a version of the VT-4 with reactive armor on the side of the turret, like in the picture below. Based on our experiences with ATGMs in recent combat, it would be stupid not to have reactive armour protection all around the turret.

I find those numbers unrealistic. the army is looking for local production of tanks, be it T-90 or VT-4. They wouldn't look for a local assembly line if they were after just 150 VT-4. Local production would put the minimum estimate on at least 400 tanks if not more, if they achieved local production they would most likely build over 600 tanks.

Also we don't have 146* Abrams anymore, dozens have been destroyed/damaged too badly for service.
أعلى

iraqidabab كتب: ↑
الثلاثاء نوفمبر 29, 2016 1:29 am
I find those numbers unrealistic. the army is looking for local production of tanks, be it T-90 or VT-4. They wouldn't look for a local assembly line if they were after just 150 VT-4. Local production would put the minimum estimate on at least 400 tanks if not more, if they achieved local production they would most likely build over 600 tanks.

Also we don't have 146* Abrams anymore, dozens have been destroyed/damaged too badly for service.

I think only ~ 6 abrams were destroyed, hence the Iraq order for 6 replacements. Many were damaged, you are right, but I've seen plenty of damaged tanks return to service, and Iraq just signed a new maintenance contract aimed at putting more back to service I think - but I guess this is a topic for a different thread
أعلى

I don't think Iraq will buy the Chinese MBT.

In my view the chinese deal is most probably aimed pure and squarely at the following items:

1- FD-2000 SAMs (this is the single most critical part since Iraq has neither the Air nor Ground based air defence system to protect us against even the weakest of our neighbours... let alone the more powerful ones)

3- Early warning Radars (in addition to the US and Russian ones they've bought...) the more mixed the radars the harder they are to countermeasure against.

5- Chinese Munitions Factories for Iraq (this is a definite).


For MBTs and IFVs My understanding is that Iraqis had wanted more Abrams + T90 + BMP3s... in the past! however being realistic they have now resorted to buying T72 and BMP-1s and organising facilities to upgrade them locally as a "cheap solution"... freeing up limited funds to close the critical gaps in air defence. Just my opinion.
أعلى

The new export version of the HQ-9B that Iraq is aiming to get has a coverage radius of about 200km... with a 10% overlap per battery we're looking at Iraq buying about 7-8 Batteries at least to give a modicum of national air defence cover.
أعلى

It doesn't seem like $2.5 billion is enough to cover both MBTs and the air defence. That's why I asked the original question. I think it probably is a good idea to buy a complete air defence complement that covers all or Iraq rather than incomplete air defence and some MBTs
أعلى
أضف رد جديد
49 مشاركةً