بواسطة hayder
The only operational Frigate of the Iraqi Navy. Acquired from Yugoslavia in 1978

The Ibn Marjid (formerly the Ibn Khaldoum) is a Yugoslav-made Iraqi Yugoslav type frigate of 1850 tons displacement, fully loaded, launched in 1978. She is powered by one Rolls-Royce, Olympus TM 3B gas turbine rated at 22300 hp and two MTU 16V 956 TB 91 diesels rated at 7100 shp providing a top speed of 26 knots on gas and 20 knots on diesel and a range of 6400 km at 20 knots. She carries a crew of 93 plus 100 trainees. Armaments consist of the provision to carry four Aerospatiale SSM Exocet anti-ship missiles; one Bofors 57 mm/70 gun; one Bofors 40 mm/70 gun; eight Oerlikon 20 mm guns arranged in four twins; two 21 inch torpedo tubes and one depth-charge rail. The Ibn Marjid was mainly used as a training ship and as a transport during Iraq's war with Iran and was still operational in 1989, despite Iranian claims to have sunk it.

بواسطة TangoIII
This ship classified - Training Frigate - Iraq had orderd in 1975 from the former Yugoslavia Split Sy, it probably entered the service before the start of the Iraq - Iran war, she was a sister ship of the Indonesian Navy Ki Hajar Dewantara F 364 training frigate, but with some differences. She was bombed in 1991, but was able to perform training missions after 1991. She was sunk in the U.S. air attacks during the U.S. invasion of Iraq in 2003. This ship was never arming with missiles as they training ship and used for only patrolling duty. This ship was not that Ibn Khaldun ship the -Academic Naval Ship - which built in Denmark. in fact that wrong mixing between the two. Their are two different ships. 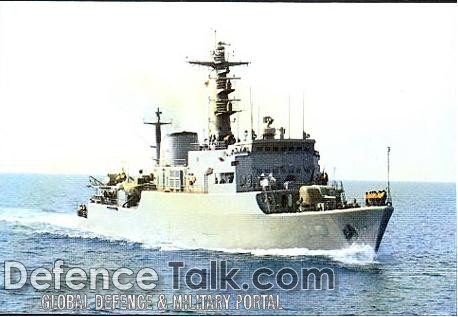