The service life of this small twin engined bomber with the Iraqi air force.
أعلى

The Iraqi Aiforce was eceived in early 1960, the first batch of the 12 light bomber type Il-28 Beagle. And has been formed No. 8 Squadron in 02/10/1960. The aircrafts continued in service in the Iraqi air force until the year 1975 where their were retired. They have been used in attacking Kurdish sites in the north of Iraq at the outbreak of armed confrontations between the Kurds and the central government from 1961 to 1975. 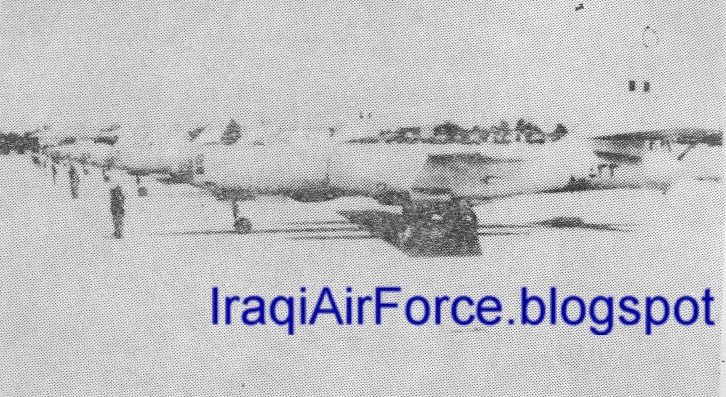 Iraqi Il-28 after retired in Al Taqaddum Air Base. Their last appearance was in 1981 when it bombed Iranian Khomeini Revolution Guards (IRG) troops near Kasr Shirin, there was a formation of Phantoms returning to thier AB flying nearby but they decided not to intercept the bombers because their fuel was limited.
Ethics, Faith, Courage.
أعلى

this is my first post in this forum with pic for dual seat IL-28.

thanks to information and picture about jet bomber
أعلى

A question here: I know that already the RIrAF wanted to establish two 12-planes bomber squadrons, back in 1958. They requested the delivery of Canberras from the UK for that purpose.

Anyway, after the 14 Tammuz Revolution, the UARAF (the air force of Egypt and Syria, which were united as the "United Arab Republic" from 1958 until 1961), deployed a squadron of MiG-17s to Habbaniyah AB. After this squadron arrived, the Egyptians apparently sent also six Il-28 bombers to Iraq.

So, the story has it that the first six Il-28s No.8 Squadron IrAF operated were actually from Egypt, and that they were subsequently reinforced through 10 additional planes (including two Il-28U conversion trainers and two Il-28BM target-towing variants) acquired "directly" from the USSR. Known serials of IrAF Il-28s appear to support this variant.

But are there any publications in Iraq or any other sources that could confirm this?
أعلى

Personally I do not think this idea or story, the relationship between Iraq and the United Arab Republic UAR has deteriorated rapidly after the revolution of July 1958, where the honeymoon did not last about a year only. In 1959 began to break them. The Ilyushin -28 came to Iraq to what it believed in early 1960 as the eighth squadron was formed, whith the Il-28 on February 10, 1960. I have a relative who had worked within the eighth squadron (was died later) - a mechanic - he was talking about Ilyushin aircraft that brought from ex- the Soviet Union and then with experts and pilots who trained in the Soviet Union at the time did not refer to such an event or like this story. But the well-known after the overthrow of Gen. Abdul Karim Qasim in February 1963 the Egyptian planes were existed in Iraq and perhaps a squadron of MiG -17 and may Il-28.
أعلى

By the way I have a picture on a joint the Iraqi's hunter and Egyptian's MiG -17 perhaps when the Egyptian squadron in Iraq and maybe you have another comment?

amazing and rare pic Tango! thanks for that.

I also doubt that any UARAF squadrons were in iraq before 1963, Abdul kareem qassim distrusted them and their close relationship with arif from the beginning.
أعلى

TangoIII كتب:Personally I do not think this idea or story, the relationship between Iraq and the United Arab Republic UAR has deteriorated rapidly after the revolution of July 1958, where the honeymoon did not last about a year only. In 1959 began to break them.

This is truth (that the relationship between the UAR and Iraq after the 14 Tammuz Revolution worsened quickly)... But, before it was so far, the UARAF really did deploy its MiG-17s and Il-28s to Habbaniyah. This is confirmed by a number of photos I've recently got from Egypt, which show Iraqi personnel inspecting "first MiGs in Iraq ever", at Habbaniyah AB (this story and all the relevant photos are going to be published in Arab MiGs 2, next year in October).

This was also confirmed by one of USAF pilots who was with the group of five that flew the first five F-86 Sabres to Iraq, arriving there just a few days before the 14 Tammuz Revolution. He saw the UARAF MiG-17s at Habbaniyah before he and other Americans with him got arrested and expulsed from Iraq.

This UARAF MiG-17 unit remained at that air base for only four months. Subsequently, it was withdrawn back to Syria.

The story about these Il-28s is much less known. There are no photos of them in Iraq, at least none that would show them still wearing the UARAF insignia. But, I suspect that the six planes in question were originally (before the UAR came into being) delivered not to Egypt, but to Syria. Subsequently, they were left in Iraq, and entered service with the IrAF.

That said, sure, No.8 Squadron was formed only in early 1960, but these six Il-28s must've been in Iraq already since much earlier times: the IrAF only lacked crews for them.


But the well-known after the overthrow of Gen. Abdul Karim Qasim in February 1963 the Egyptian planes were existed in Iraq and perhaps a squadron of MiG -17 and may Il-28.

Sincerely, I do not know about any deployment of the UARAF planes to Iraq after either of the two coups of 1963.

However, since many of No.9 Squadron's MiG-19s have been destroyed during the coup of November 1963, that type was subsequently withdrawn from service and all the remaining planes have been subsequently donated to Egypt. That's how those "famous" MiG-19s came into being that later entered service with No.20 or "al-Araba" Squadron UARAF, and wore no serials but names of major Arab cities on their front fuselage: the Egyptians namely took over this tradition from No.9 Squadron IrAF.


By the way I have a picture on a joint the Iraqi's hunter and Egyptian's MiG -17 perhaps when the Egyptian squadron in Iraq and maybe you have another comment?

Sure. According to Maj Gen ar-Razzaq (two-times C-in-C IrAF, ret.), this shot was taken during one of joint exercises with the UARAF before the 14 Tammuz Revolution.

That's why the two Hunter F.Mk.6s on that photo are seen wearing the old, Royal Air Force fin flashes, not the ones introduced following the Revoltuion (for similar reasons, the two MiGs also wear pre-UAR markings of the Egyptian air Force).

As surprising as this might sound, there have been several such joint exercises during the 1950s, not only with the Egyptian, but also the Lebanese Air Force. In addition to this, the RIrAF also put up a fascinating air power display during the visit of the Saudi King to Iraq, which involved simulated strafing attacks by Furies and Vampires.
أعلى

Sorry, have to correct myself: the two MiGs wear actually the UARAF insignia...

Hm, makes that photo even more interesting. It must've really been taken very shortly after the 14 Tammuz Revolution - i.e. in 1958!
أعلى

That makes sense, Raaft, thanks a lot.

I found nine Il-28s at the former al-Taqaddum AB, back in March 2006. These included five Il-28 bombers, two Il-28BM target-towers and two Il-28 conversion trainers (recognizable by an additional cockpit in the front fuselage). AFAIK, most of them can still be found there.
أعلى
أضف رد جديد
19 مشاركةً