Well, if i may ask one more of my interminable list of questions.

I was trying to find an accurate enough Order of Battle of the Iraqi Air Force in June 1967, without particular luck so far, can you help me please? Thank you very much.

(There is some good data for the 1973 and 1980 Iraqi Air force OOB on the Iraqiairforce.blogspot.co.uk, but i can't seem to find anything for June 1967- or maybe i haven't looked hard enough!)
أعلى

Few 'cents' from my side in regards of this topic...

Iraq was ready to deploy its troops and air force to Jordan already as of mid-May 1967. The Jordanian government declined this offer. King Hussein changed his mind - very suddenly - on 30 May 1967, and during the following two days he demanded Iraq not to deploy one or two armoured brigades and two squadrons of its fighters (as originally offered), but an entire reinforced division and four squadrons of fighter aircraft to Jordan.

Moving all these assets over more than 1000km is by no means an easy task: anybody who ever moved his own stuff from one home to the other knows how much it takes to do so. Now, imagine moving an entire 'town' of 15000-20000 people over the same distance... The Iraqis tried it, nevertheless, and quite successfuly. However, 'no wonder' this massive manoeuvre was never completely concluded (definitely not in time to prevent the Israeli aggression on Jordan, that resulted in the loss of West Bank, between 5 and 10 June 1967).

I'm not sure if there was a 'Syrian' officer briefing pilots of No.6 and No.29 Squadrons at Habbaniyah, in late May 1967. Syrians refused to cooperate with the UAC (United Arab Command), and therefore, no Iraqi units were deployed there. Indeed, the Syrian military and political leadership was in quarrel all through May and June 1967, and couldn't agree whether to get involved in war with Israel until around 11:00hrs on 5 June 1967. I've heard only about Jordanian and Egyptian 'liaison officers' arriving in Iraq before June 1967 War (for example: there are photos showing Brig Gen Mustafa Shalabi el-Hinnawy - later Commander of the Egyptian Air Force - visiting No.11 Squadron at Rashid AB and shaking hands with Lt Col Hashem Manhal al-Azawi, CO No.11 Squadron, on 1 June 1967).

President Abdel-Rahman Arif, Minister of Defence etc. toured Habbaniyah and bid farewell with Squadron COs only after King Hussein called for help and a decision was taken to send IrAF units to Jordan, on the afternoon of 31 May 1967. After that, No.6 Squadron moved to H-3 airfield, where it was soon followed by No.29 and No.17 Squadrons. However, it took the Jordanians another five days to bring no decision about permitting these aircraft to be based in Jordan. Therefore, movement of Hunters to Mafraq was expected only for the afternoon of 5 June 1967 (which is why Jordanians were taken by surprise by the Israelis when these attacked Mafraq AB: the Jordanians were waiting for Iraqi Hunters and MiG-21s).

Only two formations of Hunters from No.6 Squadron attacked Israel on 5 June (actually, only one of two formations reached its target, hitting Kfar Sirkin; it remains unknown why the second formation failed to hit Lod AB, as ordered). The 'third formation' mentioned by Raaf above, flew its mission 'only' on the morning of 6 June 1967 - and its task was the one Raaf 'assigned' to a separate formation, namely Ramat David AB. This formation was preceeded by four Hunters that attacked targets in Jenin area. Additionally, four Tu-16s were sent to attack Israel on the same morning (6 June) and around the same time too. One of them bombed Netanya and returned safely; the other was shot down by Mirages and ground defences near Afula.

When Hunters returned from their attacks to H-3 airfield, around the noon of 6 June, that place came under attack by Israeli Vatours and Mirages from Ramat David AB. All Hunters returning from attacks landed safely. At the same time, two Hunters were about to take off, and two MiG-21FLs of No.17 Squadron already airborne and above H-3 when this (second in total) Israeli attack came. One of Hunters about to take off crashed in the process: the pilot pulled up too early, stalled his aircraft and hit the water-tower nearby. He was killed. The other Hunter engaged Mirages in an air combat and was claimed as 'shot down' by one of the Israelis (who was credited a 'confirmed kill'!). In return, the pilot of that Hunter claimed one of Israelis as 'damaged'.

The two MiG-21s then attacked one of Mirages, but their R-3S missiles missed. In turn, one of Israelis then claimed a MiG-21 as 'shot down' (the plane was actually 'only' damaged).

The third air battle took place on the late morning of 7 June, and saw the involvement of two IrAF pilots, one Jordanian and one Pakistani pilot flying Iraqi Hunters, versus four Mirages and four Vatours. The Israelis shot down one of Iraqi pilots as first (the pilot was KIA; he crashed into the only fuel depot at that airfield), but then the Hunter-pilots hit back, downing at least Mirage and two Vatours. In essence, all the three Hunter pilots claimed - more or less - two kills: the Pakistani did so, the Jordanian pilot did so and the surviving Iraqi pilot also claimed two. The IrAF might have found evidence for a fourth Israeil fighter shot down during this combat, but the Israelis confirmed only 3 losses.

No MiG-21s took part in that - '3rd Air Battle over H-3': by 7 June, all MiG-21s and Hunters were withdrawn from H-3 back to Habbaniyah, and only Hunters possessed the range sufficient for them to fly combat air patrols over H-3, when taking-off from Habbaniyah AB.

The figure of 273 combat sorties flown by the IrAF during this war is very interesting. I would like to know where it comes from, then a cummulative total of sorties I was able to find out is 18 'offensive' combat sorties (14 by Hunters and 4 by Tu-16s), of which five reached their targets, and around 50 'air defence' and 'other' sorties over H-3, Jordan and even over Syria (one, including four Hunters, was flown over Syria on 10 June, but did not reach the combat zone). I can only guess that An-12 and Dove transports flew quite a lot, then they were responsible for hauling all the fuel, ammo and baggage for Hunter- and MiG-21-squadrons deployed at H-3. But, I doubt they flew as many as 200 sorties in the course of barely 10 days.
أعلى 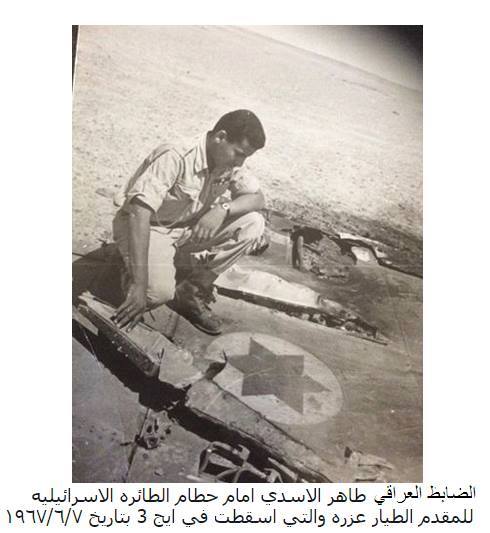