now that we have confirmation that Iraq is buying 6 Mi35M to be delivered in October 2013.

MOSCOW (Reuters) - The Russian military equipment exporter Rosoboronexport, the state corporation incoming Rostekhnadzor, put into Iraq has six Mi-35 helicopters for $ 256 million in addition to defense contracts for $ 4.2 billion, according to Reuters, a source close to Rosoboronexport.

The authorities of Russia and Iraq agreed to supply arms to the amount of $ 4.2 billion, including 36 helicopters Mi-28, in October last year. In November, the Iraqi government refused to contract on suspicion of corruption, but then supplies were resumed.

New contract for 6 cars for $ 217 million ($ 256 million with ammunition) for delivery in October 2013 was signed during a visit to Iraq, the head of Rostekhnadzor Chemezov together with the head of Rosneft, Igor Sechin, on Tuesday, the source said.

"In the sphere of military-technical cooperation with Russia in Iraq is now being implemented contracts totaling $ 4.2 billion, mainly on the supply of Russian helicopters," - said in a statement Rostekhnadzor reported on Wednesday.

The report also says the plans localization service support equipment supplied as part of the strategy for the development of Rostekhnadzor global aftermarket.

"There are other prospects in the area, which are currently being considered by the parties at the expert level," - said in a statement.

With the Iraqi authorities also discussed the expansion of contracts for the supply of military equipment to $ 8 billion from the current $ 4 billion, but no final agreement, the source said.

"Russia has quite an extensive experience of partnership with the countries of the Middle East and Iraq - one of our large customers - are reported Rostekhnadzor words Chemezov. - We are interested to see our defense products used solely to protect the citizens of this country and serve the cause of strengthening the sovereignty of the Republic of Iraq.
أعلى

please keep this thread ONLY for Mi35M discussion.
أعلى 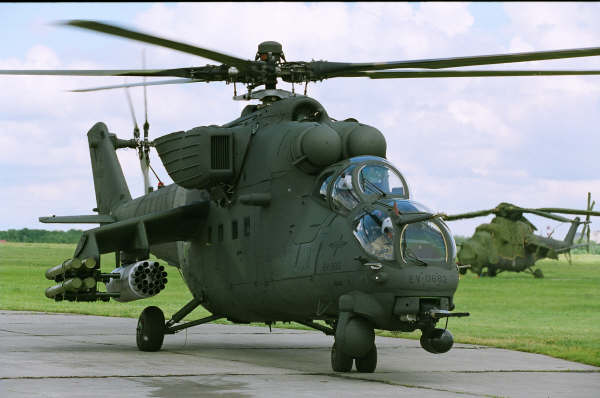