Middle East at war No 7: Hawker hunters at war: Iraq & jordan 1958-1967: Tom Cooper & Patricia Salti. Helion 2016.
Another great volume in this very interesting series. This 64 pages volume is a detailed history of the Hawker Hunter in the service of the IQAF & RJAF. It is divided into seven chapters, which start from the "Special Relationship" that bonded the UK with Iraq & Jordan & nascent air forces, through the acquisition of the first Jet fighters, The Vampire & the Venom- to the arrival of the Hawker Hunter in Iraq in April 1957, the start of distinguished service for the British fighter.
Then, the book moves to the crises of 1958, the coup against the monarchy on July 14th & its aftermath. The role of the Hunters in the bloody coup of February 8th 1963: with great photos of the destroyed MiG-19s in Al- Rashid base.
The next chapter deals with the first battles of the Jordanian Hunters against the Israelis in December 1964 & Al- Samu' battle in 1966.
The next chapter describes in details the first day of the Six Days War, discussing the "missed oppertunity" to destroy the IDF/AF after the attack on Egypt. It confirms again, that the raid against Kfar Sirkin was performed by Iraqi & not Jordanian Hunters. The narrative continues with the destruction of Jordanian Hunters, then moves to the details of the battle of H3, in which Iraqi Hunters & MiG-21s fought the raids of the IDF/AF.
the book admits that it does not provide any information regarding the role of Iraqi Hunters in the war in northern Iraq between 1961-1967.
The book is well written narrative, with great rare photos of the Hunters, & I'm looking forward to the next volumes in this series.
Per Ardua, Ad Astra.
أعلى

Re: Middle East at war series 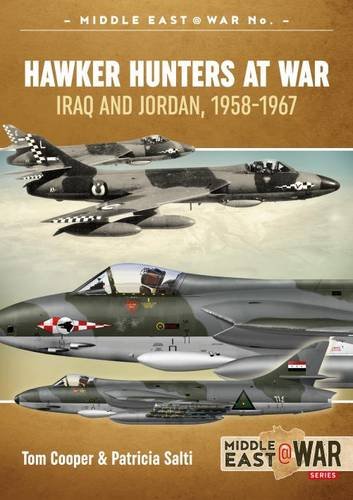